Tropical Tapioca Great for “Pudding” Color in the Summer Garden

For showy color that doesn't fade with the heat, Variegated Tapioca joins the Texas Superstar® program this month, it's spectacular yelow–and–red leafstalks retaining their “bloom” all summer.

A South American native, Variegated Tapioca has been used at one time or another in every major botanical garden in Texas. It was chosen for adaptation as a Texas Superstar®, an Aggie–inspired program that applies Texas A&M horticultural smarts to some of our best–known plants, developing and culturing them to be even more desirable, marketable and successful for Texas gardens.

Variegated Tapioca joins another colorful nonbooming annual, Supersun Coleus, as one of the only two nonflowering plants in the program, thanks to its inherent showiness and heat–, drought–, and pest resistance. Easy to grow, it also offers foliage that outshines many flowers with the bonus of a show all summer. 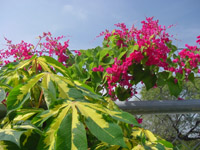 For more information on the Texas Superstar® program, go to: http://texassuperstar.com/plants/.

Unlike most variegated species, Tapioca will not flinch in intense Texas sunlight. The foliage diva works beautifully as the bull's eye for circular plantings or as background for lower annual plants. Another common use is as a patio container specimen where it thrives despite the reflected heat from concrete or pavement.

Tapioca grows fast. A handsome four– or six–foot tree can result in a single season, thus young plants should be spaced four–to–six feet apart. Plants are initially upright, becoming wider as the season progresses. Bold, rubbery, lobed leaves can reach up to eight inches. New growth is a charming reddish pink and the lobes mature into white, creamy white, or yellow–green variegated patches that follow the main veins.

More good news: Variegated Tapioca grows well in alkaline and acidic soils alike. They even tolerate some foliar salt exposure in the Coastal Bend area. Full sun brings out the best color, but plants will tolerate partial shade. Tapioca hates over–watering as it is NOT a swamp plant.

Variegated Tapioca is a cold–tender tropical which freezes to the ground by the first hard frost. Consider it an annual in most parts of Texas and replace in spring after all danger of frost has passed.

Don't cook Tapioca unless you know what you're doing, as many parts of the plant are poisonous. The famous pudding derives from the roots of a sweet variety of Tapioca. Don't worry about your pets eating enough to hurt themselves because the plant contains distasteful cyanide compounds and have a rough texture which is not tasty. Deer will eat tapioca but it does not spoil the venison.

For photos and more info on Tapioca, go to http://texassuperstar.com/plants/tapioca/.